Today is Earth Day! Quick history lesson: Gaylord Nelson created Earth Day in 1970 after a decade of that spurred environmental action. This time in America was just after the rise and fall of the use of DDT and after the publication of Rachel Carson’s book “Silent Spring.” This was the first time that people who weren’t scientists or hippies paying attention to the environment. On April 22, 1970 people celebrated the Earth and their desire for a healthy and strong environment; rallies and demonstrations took place across the country. It wasn’t until 1990 that the holiday became a global event.

Celebrations for Earth Day vary from planting trees to enjoying a walk outside to reading Aldo Leopold’s “Sand County Almanac.” Aldo Leopold was the father behind conservation and is most famous for his “land ethic.” The land ethic is about protecting the health of the land through developing and building relationships between people and nature. The “land ethic” is about the entire community in ecosystems so plants, animals, people, soil, air, water or anything that interacts with each other. There is a mutual respect for everything in that community; this is Leopold’s vision for the “land ethic”.

The best way to celebrate Earth Day, in my opinion, is to appreciate the environment and nature. Instead of thinking about all the problems and complicated issues I’ve touched on in my other articles, focus on how it smells outside or how it’s finally spring and the buds are coming out. (Unless you live way north in which case I wish a speedy melting of your last snowfall). That for today we celebrate how great of a day it is, celebrating the little things. We could pay more attention to the song of the birds or make a meal from the freshest, most local food we could find. Appreciating the environment.

In Madison, Wisconsin I celebrated Earth Day by first, wearing green- how easy. My student organization, REthink Wisconsin, partnered with our University Bookstore for their “Hug a Tree for Charity” event. For everyone that hugged a tree the bookstore agreed to donate $1 to REthink. We successfully raised $300. I found it funny that people responded “no” to the question “Do you have time to hug a tree?” while looking down at their phones. Maybe just for today people could look up and enjoy nature instead of down at their phones.

As Nelson once said, “the wealth of the nation is its air, water, soil, forests, minerals, rivers, lakes, oceans, scenic beauty, wildlife habitats and biodiversity… that’s all there is. That’s the whole economy. That’s where all the economic activity and jobs come from. These biological systems are the sustaining wealth of the world.” On Earth Day instead of focusing on the material items you don’t have or what you want, look at the nonmaterial ‘wealth’ that we do have all around us.

I also volunteered at an Earth Day Conference at the Monona Terrace located just off the Capital Square in Madison. The theme of the conference was “Ecology, Economy and Justice in a Rapidly Changing World.” I helped run a breakout session about Phosphorus and what projects were being done around the state to help prevent phosphorus runoff from entering the lakes around Madison. For those that travel to Madison during the summer, especially in the last few years, know that the lakes turn this brown or greenish color depending on the amount of rainfall that brings phosphorus from farmland, residential neighborhoods, cities etc. One of these projects is sponsored by the Clean Lake Alliance. They facilitate relationships between farmers who encourage other farmers to take actions on their properties to help control phosphorus runoff. This type of responsibility is inspiring and applies to many parts of sustainability.

Whether you’re at a conference, in an office all-day or running around doing errands. Take part of today to get outside or do something for nature. Maybe today isn’t the day. Set aside your own Earth Day. Maybe that’s one time or once a month to just appreciate how exciting and fascinating nature can be. We sometimes take these sites, sounds and smells for granted but today, on Earth Day, we take time to take a closer look and realize how special nature is and that it truly does deserve to be respected and protected. Happy Earth Day! 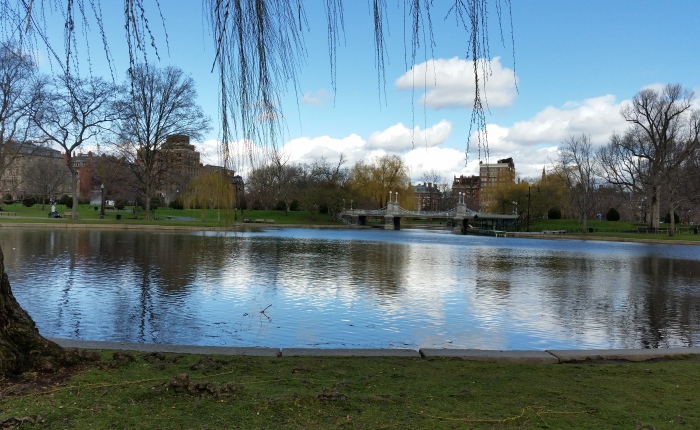 I’ve always enjoyed history, specifically American history. I love documentaries about American wars, the settling of our country and anything that gives a glimpse of how the land was thousands of years ago. Not to mention I have made it a goal while traveling to visit all the iconic spots seen in the movie, National Treasure. So I was very excited to be able to travel to Boston for work along with a day or two of site seeing and catching up with good friends. Here is my sensory tale from my three wonderful days in Boston, MA.

Sight: Let me start out by saying I managed to see a lot while in Boston. I walked to Fenway Park by way of the walkway along the Charles River, the Boston Commons and Public Garden. I learned a lot about Paul Revere by visiting his historic home, walking along the Freedom Trail and across the Longfellow Bridge, eating at Green Dragon Tavern, stopping at the North Church and Paul Revere Mall as well as paying respects at his final resting place in Granary Burying Ground. I spent time enjoying the spring weather in the Boston Commons while admiring the golden dome of the State Building. I also took a cup of tea to the Boston Tea Party Museum and walked through both Harvard and MIT while spending time in Cambridge. 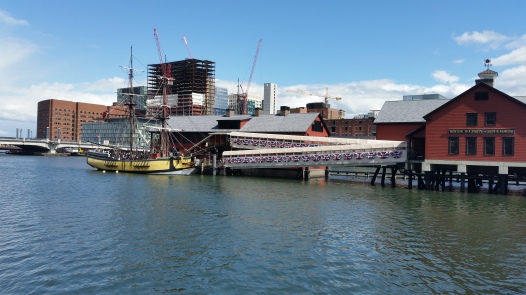 It was $25 to do a tour of the Boston Tea Party Museum, not worth it to me, but I walked around the gift shop and watched the people on the ship. They had pretend boxes of tea that you could throw overboard- cool idea. 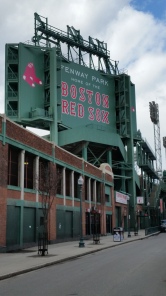 I was here the Friday before opening day. Very cool to see everyone preparing the stadium for the new season. (Go Cubs!) 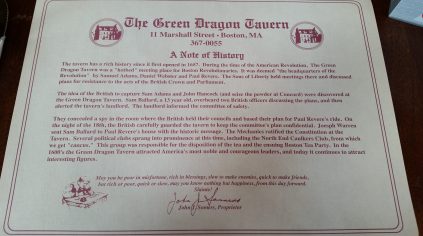 No pictures were allowed inside the home and the tour was only $3.50. The employees there are very knowledgable and gave great information.

Paul Revere Mall. I haven’t studied Paul Revere deeply, but it seemed like he was more of an average guy just very involved in his church and community. He was brave and patriotic and I think we can all learn something form him.

So with all that in mind, my favorite site(s) were the streets of Boston themselves. I spent a lot of time walking through the North End and Beacon Hill. You can tell you’re in an old city just by how the roads curve and are so narrow. In the North End the streets are brick and uneven, you feel like Paul Revere or Samuel Adams could turn a corner and start walking towards you. I also noticed, that’s sort of odd to notice, the streetlights. They were black, iron and the lights inside them were dimly lit like candles. Walking around Boston, you can feel the history and it’s an experience I have yet to find anywhere else.

Sound: While waiting to meet my friend in Cambridge- I should mention this is my oldest friend who I had not seen in 8 years, so I was very excited- I was sitting at The Abbey drinking a glass of wine listening to the bar chatter. As each new person came in, the bartender and owners greeted them, mostly by name. It made the whole place feel very welcoming and comfortable as though it was a family reunion instead of busy bar. Even as I was sitting alone, I didn’t feel alone. I was part of the reunion, relaxing and catching up after a long week.

Smell: I’ve always been comforted by smells. That probably sounds weird, but think of your family or significant other; they have a distinct smell that when you hug or embrace, you probably feel calm and safe. So when my long time friend, since we were in 3rd grade, walked into the restaurant, I stood up to give her a huge hug and her perfume was the same as always- Anise Anise. Since we last saw each other every time I smell it I think of her and it makes me smile. She gave me a small bottle to take back home with me :-).

Taste: I had a lot of delicious food in Boston and Cambridge; I was fortunate to have my friends pick great restaurants and order very well. Thursday night after the work event, I met with a few work friends at a restaurant in China Town, Shojo. It’s a smaller place with an urban but cozy vibe. My friends ordered several dishes like fried rice, a chicken sandwich, short ribs and my favorite taste from the trip: Big Mac Dumplings. Yes, it was all the wonderfully satisfying flavors of America’s favorite sandwich wrapped up and served as a dumpling. There was no bun or cheese, but the meat inside was flavored so well that I ended up eating 2 and cutting them into smaller bites to enjoy longer.

Touch: Before catching a cab for the airport, I walked through the Granary Burying Ground. It’s here that Benjamin Franklin’s parents, the victims of the Boston Massacre, John Hancock, Mother Goose, Samuel Adams and Paul Revere a buried. When you walk through the front gate there’s a nice man with a thick Boston accent handing out maps and information packets. I walked over to read the stone for Samuel Adams (an empty pint glass was placed on top of his stone) and next to him the victims of the Boston Massacre. As I wove my way past Mr. and Mrs. Franklin and John Hancock I made my way to the back where Paul Revere is buried. People throw coins, not just pennies, around the tombstones and burial markers to pay respect.

On my way out, I reached out my hand to graze the tops of a few of the tombstones of the lesser-known individuals buried there. I stopped and read the years on their stones. 1500s, 1600s – this cemetery has been here longer than the country. I didn’t take any photos in the cemetery, I thought that was odd to do, but I did just leave my hand on the top of a tombstone just for a few seconds. All the Boston winters and construction and everything and these original rocks are still here. I think it’s important to appreciate history and preserve it, just as this cemetery does to help us remember how our country came to be.

Clearly you can tell I have an interest and passion for history. While I know that looking forward is most important, you can learn a lot from understanding the past. Boston certainly is a city with a ton of American history, but it’s also doing wonders for our future. The bike lanes through the greater Boston area for instance, are a perfect large-scale example that other cities can use to improve their own sustainable transpiration options.

For anyone looking to travel to Boston I would recommend doing so in warmer weather because you can pretty much walk the city in a weekend and see so much more than if you took cabs everywhere. Even in early April I found myself stopping and random stores just to get out of the wind and cold. The people of Boston are very friendly and very helpful when it comes to directions and places to eat. They also have bus tours and Duck tours, which I was not able to do this trip – Duck tour is on my list for next time!